Book Review: It Ends with Us by Colleen Hoover 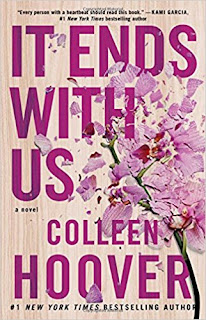 A book that will tug at your heart because of the subject that forms its crux and the way with which it has been dealt with. A light read that is not hollow and the writing which is Oh-so-perfect!

'It Ends With Us' is a beautiful love story between a man and a woman and also between a mother and her child. The story takes place in Boston and the city plays an integral part in the novel.

Maine girl, Lucy Bloom, has a passion for gardening and hates her wife beater of a father. She meets a hunk on the day her father is buried and she has almost run away from his funeral after delivering a disastrous eulogy. He has all the qualities of an Mills and Boons hero plus Ryle Kincaid is a neurosurgeon. But it is the two different things that they both want which squish the chance of them being together. So after the first very dazzling meeting on a rooftop, they both meet each other after some six months when Lucy has opened a flower shop and has employed Ryle's sister.

In between we get to read some very interesting entries into the journal of the teenager Lucy addressed to Ellen Degeneres where she introduces a homeless boy Atlas.

An evening when Lucy and her mother, who has moved to Boston since the funeral, have plans for dinner at a new eatery when Ryle self invites himself. The waiter who serves them that evening is none other than Atlas. Lucy excuses herself from the table to go to the washroom and Atlas follows her in there. As they are coming out after a brief 'where have you been and any girlfriends', Ryle sees them and blows a fuse. The novel gathers speed after this and some sweet and some nasty things happen as the story evolves. What is it that 'ends' and is at the centre of the book, is a sensitive topic and not an easy topic to write on but one that has been dealt with confidence and great warmth.

I would not want to spoil the fun by revealing any more about it here so I will talk about why I absolutely loved this book.

For one, this though looks like any other Mills and Boons Romance at the beginning, I loved this book because here none of the characters are actually bad people. They have flaws (except for Lucy's father) for which there mostly is an explanation. So the book doesn't make the heroine choose a guy because the other one is a rotten apple as is generally the case where more than one hero appear.

Secondly, all the while I was thinking, how could someone write so beautifully. The story reads like a dream. Know what I mean? Talk about fluidity. This must be one of the few, rare books where i did not skip pages to see where the story was going. So much so I could not even bring myself to put it down. I was just going mad thinking about how could someone write this well. This seemed to come from the heart.

So I had to hunt this incredible writer and after googling here I went to her IG account. And lo behold! I had the reason there. She says in one of the posts that she did not edit even a single word from this book...so...you see, a thing like that has to have an impact.

Sighhhh! Go read it if you are in between books, relationships or jobs. This light read is really a good read which though is light yet not hollow.