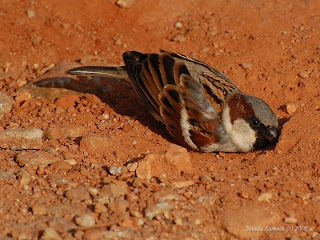 I was yesterday informed via an e-mail that tomorrow is the world house sparrow day. I was instantly reminded about the chirp chirp- a common melody of my childhood. I was also reminded of the fact that the chirp chirp has almost gone missing from the background of our days. Besides on twitter, I haven’t even sighted the small little bird in ages.
Then one incident of a few months back came to my mind. I am still trying to recollect but can’t figure out where was it that I saw the bird, but I do remember that the little bird had had a bath and was shaking off excess water. It was actually a picture perfect moment and somewhere else it would have made to nat geo or maybe animal planet.
We all know that the microwave pollution from mobile phone towers has been a reason behind the disappearance of the Gauraiya but not many know that glass and concrete buildings that have been coming up in the name of modernization have taken away from the bird its habitat.
World House Sparrow Day also celebrates the common biodiversity found in and around us and draws attention to its importance. So make 20 March 2010 a day to celebrate the common birds and biodiversity around you and raise a toast to the House Sparrow.
In an attempt to do something about the sparrow I have asked a reporter friend to do a story. Given him print outs on the bird, phone numbers of activists and even some one-liners. I hope some people through his article and some more through this write-up will begin to wonder and set out a sparrow feeder with grain and a bowl of water and maintain it beginning from tomorrow. Some intelligent being from some school/college ecology club will make presentations on why we need the House Sparrow, the dangers it is facing and how each of you can help. Put up feeders and nesting boxes. Twitter it, put it on fb or whatever you call my space.

The theme for WHSD 2010 is, We will save our House Sparrows. And by good lord Lets do it!
(suggestions courtesy: http://www.worldhousesparrowday.org/)
birds buildings concrete glass house sparrow world

TN said…
Very recently I saw sparrows and I can't describe how I felt. All i can say is that somewhere i was reassured that we won't let those small beings vanish like we have so many of them. I have hope :)
7:45 PM